Around the time of Jean Claude Junker’s nomination by the European Parliament to serve as President of the Commission, it could frequently be heard that Junker’s brand of euro-federalism was a sort of “relic”. Few believe any longer in the viability of the integrationist project, it was said, and Junker’s appointment served merely to demonstrate the dearth of guile on the part of European leaders.

The ultimate proposition here is that European federalism is in permanent retreat. With the increasing electoral appeal of nationalist and eurosceptic parties of both left and right, and the spectre of British exit, it should appear to be a difficult business to deny the truth of the above.

The graphs below represent popular estimation of the European Commission and European Parliament respectively, with data ending in June 2014. 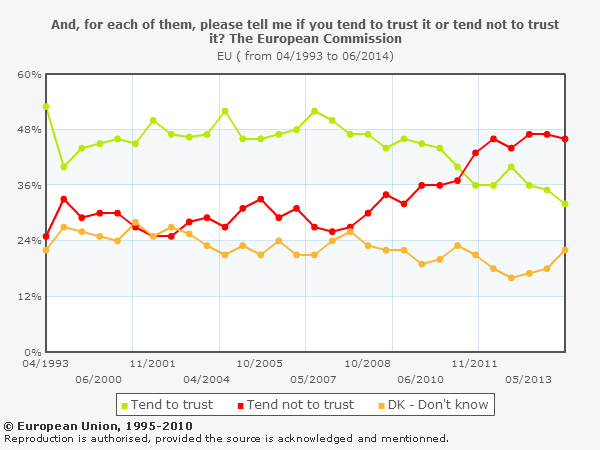 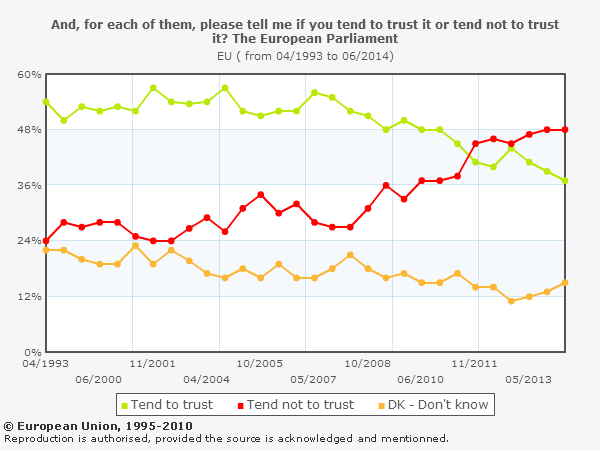 These demonstrate the fall in public esteem for both institutions, with accelerating speed since the onset of the European financial crisis. Yet similar polls recording the degree to which Europeans view themselves as citizens of the EU, reveal both stability in attitudes and majorities reporting themselves to feel as EU citizens;

And while the public’s trust in EU institutions declines, it remains the case that Europe is trusted to a greater extent than national governments;

“Trust levels in political institutions continue to decrease, though there is still more trust in the European Union than in national institutions. After a 2-point decrease, trust in the European Union has fallen back to the spring 2012 level (EB77). It is still higher than the levels recorded for national governments (25%, -2) and parliaments (26%, -2), which are also facing a slight decrease.” – “Public Opinion in the EU”. Standard Eurobarometer 79, Spring 2013.

In any consideration of the above, it must be remembered that any decline in trust in EU institutions is directly correlated with the onset of the European financial crisis and the institution of austerity regimes in member states. At no other time in the EU’s history have sovereign debt levels forced the simultaneous introduction of such policies. Consequently, it remains to be seen whether lasting damage has been done to the esteem of Europeans for the EU (most especially in peripheral regions, where pessimism as to the future of the EU is the most pronounced), or whether the current mood will fade with the easing of austerity.

While it would be foolish to speculate as to the future of public opinion on this matter, it is perhaps salient that popular enthusiasm for the EU is greatest among the young. Gallup polling at the end of 2013[i] revealed majority approval for the EU among 15 to 30 year olds in 14 of the 28 member states. In six states, Belgium, Ireland, Latvia, Estonia, Romania and the Czech Republic, support from this age group rose by more than ten per cent on the previous year.

In the UK, where a referendum on EU membership is expected sometime after the 2015 general election, young voters are most likely among all age groups to oppose withdrawal. A YouGov survey from December 2013[ii] recorded that among 15-24 year olds, 53 per cent would vote to remain in the EU, as against just 22 per cent in favour of withdrawal. Strikingly, this 31 per cent gap between support for membership and support for withdrawal is an almost complete inversion of the 28 per cent lead for withdrawal among the over 60s.

Levels of support for the EU among young voters, therefore, ought to offer some degree of comfort to those committed to European integration.

On the basis of the above, the following conclusions can be made;

(i) Popular discontent with EU institutions and leadership does not necessarily translate into opposition to European integration. In spite of the profound unpopularity of the Commission, the Parliament and the EU leadership more generally, more than 62 per cent of Europeans living in member states consider themselves citizens of the EU.

(ii)  Young voters are more inclined to support the EU and its institutions. Clearly the benefits afforded to the young through EU labour market and migration policies have created a loyal constituency. Unless this loyalty dissipates with age, it is reasonable to expect European electorates to become more inclined to be in favour of the EU. Whether this will tend to manifest itself in support of further integration is not clear; it would, however, be reasonable to suspect so.

Consequently, it would be premature to claim that European integrationists (or federalists, or whatever one may wish to call them) are no longer relevant to our present political situation. Certainly, the political predilections of the youngest generation of EU citizens suggest a viable future for the project of integration.