Society is an ever-changing setting of public interaction, shaped by altering economic, political, cultural and social environments. The purpose of this website is to identify and explore these issues, providing a forum for informed debate on and a further understanding of the societies we live in.
Articles / The Book Blog

In review: ‘The Crisis of the European Union: a response’, by Jürgen Habermas 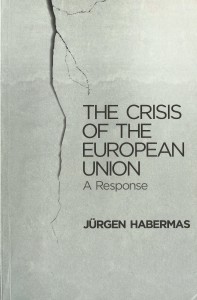 Jürgen Habermas, in “The Crisis of the European Union: a response” presents a powerful case for (a)  the expansion of the powers of the European Union and (b) (more explicitly than in the case of (a)) the creation of a European “demos” or “civic solidarity” (p. 53). I shall address his arguments for both (a) and (b) separately, along with his assessment of the constraints in the way of the realisation of both aims.

Habermas’ case for (a) is a powerful one; what he argues for is an “uncoupling of the democratic procedure from the nation state” (p. 14). In this case, that entails the bolstering of the powers of the European Union. His case for this is roughly characterisable as follows;

(i) Democratic government requires that citizens play a role in shaping the forces which (to some substantial degree) govern their lives. I shall leave this controversial thesis unchallenged for the most part, although I believe that there is a strong empirical case to be made that a politically apathetic citizenry is no barrier to good government and the functioning of a liberal (democratic) society. In any case, I think (i) can be modally qualified to the state that democratic government requires that citizens could, through appropriate engagement with institutions, play a role in determining the forces which govern their lives.

(ii) The power of nation states to control the forces that substantially govern the lives of their citizens (market forces, natural environmental forces, etc.) is diminishing. (And there is no reason to expect this process to be reversed).

(iii) Trans-national bodies with a high degree of political power (in this case, the EU), are better able to control these forces.

(iv) Therefore, the political powers (and the degree of popular democratic control over) of the EU must be expanded, on the basis that there is an injunction to, as Habermas puts it, expand the “scope for the political shaping of living conditions” (p. 15), from (i).

This argument is drawn out from the following quote by Habermas: “In view of a politically unregulated growth in the complexity of world society which is placing increasingly narrow systemic restrictions on the scope for action of nation states, the requirement to extend political decision-making capabilities beyond national borders follows from the normative meaning of democracy itself.” (p. 15).

I believe that the above argument is a sound one, and must be answered by opponents of European integration. Habermas’ account of seeming popular resistance to EU expansion, however, is less cogent.

It is his belief that popular Euroscepticism is in large part the fault of the cowardice of political elites, who, in his view, are hamstrung by a “fear of shifting public moods as measured by opinion polls” who do not regard it as politically advisable to rely on the “persuasive power of good arguments” (p. 6). This seems unfair. I shall address this point below, but first I should note that his main argument is not that “political elites”, for whom his exemplar is Merkel (he is sharply critical of Merkel, especially in the final section of the book – the reprinting of the article “A pact for or against Europe”. See especially pp. 133-5) have resisted the realisation of (a); certainly this is not true of Merkel, who presided over both the Lisbon Treaty and the European Stability and Growth Pact. His complaint with them is that they have not sought to promote the realisation of (b).

Why is (b) an important aim? I believe that it follows from the argument above, for political integration, that there is an injunction to increase the power of the citizenry’s decision making powers with respect to the activities of European governance. Now in the absence of a European “civic solidarity” (Habermas’ phrase) this ability is likely to be limited. Instead of utilising the EU to promote common interests and best practice among European institutions, citizens are likely to see a zero-sum game in terms of access to European resources and influence. They are less likely to see the value in shared European projects such as, for example, action on climate change or foreign policy. This too, I believe is a plausible argument.

But why blame political elites for the failure to realise (b)? As Habermas notes, “a social movement for Europe is not in the air”. (p. 137). Clearly there is some recalcitrance towards further integration among Europeans which is at present immune to the persuasive powers of political elites. For Habermas to ignore this is to overestimate the extent to which responsible debate within civil societies can result in “rational will formation”, or, to eliminate obstinacy, prejudice and national chauvinism. To take an example, in the UK, a recent survey indicated that almost half of Britons agree with one of four anti-Semitic statements put to them[1]. Similar surveys in France, indicate smaller, though still substantial support for various anti-Semitic propositions, particularly among supporters of the Front National, supporters of the Left Front, and Muslims. Popular prejudice and chauvinism has its roots far too deep to be dug out by the injunctions of (anyway distrusted) political elites.

This would seem a depressing conclusion for those who agree with Habermas (as I do), that (b) is a valuable end. A change of focus, however, yields a melioristic conclusion. Why not seek first to “Europeanize” certain political institutions and to see what changes result in civil society as a consequence? Habermas himself calls the “Europeanization” of the party system of the European Parliament and a unified electoral law for elections to that body. (p. 43). Why not go further than this and ask why the boundaries of the electoral constituencies of the European Parliament (it must be acknowledged that several countries have a single national constituency), should be restricted to within national borders? Why should adjoining regions with a high degree of economic interdependence not elect the same representatives to the European Parliament, regardless of whether they are within each others’ national borders? Would this not have the desired effect of a Europeanization of the party system?

It is worth noting here that this would be an institutional measure, imposed on the electorate. What is the harm in this, if it results in a corresponding (long-term) growth in European sentiment? Given that Habermas has established (I believe) an impressive normative case for both (a) and (b), it does seem clear, as Habermas thinks, that there is an injunction upon political elites to promote a European “civic solidarity”. But why should this not be attained through institutional means, where engaging in European advocacy in European society proves too unreliable, or too slow, an activity to bring about (b)?

The above, of course, is only a minor quibble in the overall context of Habermas’ arguments, which, as I have acknowledged, present a case for European integration which demands an answer from its opponents.