Neighbourhood of strangers: AirBNB and the commodification of housing

Figures published by the Department of Housing this month indicate that the number of homeless people in Ireland has reached the 10,000 mark. Responding to the escalating figures, Minister for Housing Eoghan Murphy said that current housing policies ‘were working’, but that the nature of the housing crisis meant it could never be ‘turn[ed] around in two years’.

Four years ago, with homeless figures at a comparatively paltry 3,000, this author wrote of the urgent need for further provision of social housing and a policy understanding that the private sector would not be able to adequately provide for the housing needs of the economically marginalised in Irish society. Since then, homelessness has more than trebled, and for those in Dublin fortunate enough to be able to afford rent, over half their net income is now needed to cover it, making Dublin more expensive than Paris, Singapore or London (Borough) as a proportion of income spent on rent, with Galway exceeding the rent as percentage of income for notoriously expensive San Francisco.

Coincidently, it was the prohibitive accommodation prices of San Francisco that led to the development of one of the most successful ‘sharing-economy’ applications invented and the subject of this article, Airbnb, developed from the experiences of the founders renting out air mattresses in their living room to help offset their own rent. For many, Airbnb encapsulates the sharing economy: the online platform allows home owners to rent out unoccupied rooms that may otherwise lie idle, providing travellers with a budget-friendly alternative to hotels. Furthermore, the idea that guests are not clients in a hotel or hostel, but rather live in real homes is encapsulated in Airbnb’s catchphrase ‘live like a local’, creating an impression of one not merely being a tourist, but rather a traveller making a seamless transition into the local environment.

But while the ‘live like a local’ motto might resonate with travellers and hosts, it unfortunately largely does so at the cost of the locals themselves. Hotels, hostels and other specialised tourist accommodations must undergo planning procedures that account for the effect of transient populations on the locality, usually leading to them being located away from residential areas. Airbnb, in contrast, has enabled tourists to penetrate residential neighbourhoods by being located in hosts’ ‘homes’, bringing short-term tourist residency to areas that would otherwise be deemed unsuitable for tourist housing on an official basis (Gurran and Phibbs, 2017).

In geographic areas with a strong focus on tourism, short-term accommodation is already established and welcomed by the local economy. Yet in high-density metropolitan areas, where problems such as traffic and parking congestion is experienced, increasing numbers of tourists compounds the difficulties and is more likely to be resented (Gurran and Phibbs, 2017; Richardson, 2015). The infrastructural requirements for a stationary residential community are not the same as for temporary, short stay-residents, with the impromptu and often seasonal nature of Airbnb accommodation raising planning difficulties in the management of traffic, waste, privacy and overcrowding concerns (Gurran and Phibbs, 2017, p. 82).

A sharing economy for some

The sharing economy has created disruption in other industries, with Uber’s effect on transport having led to its own regulatory problems, most notably in London. However, the disruptive effect of Airbnb is magnified by the nature of the market it operates in, with the inelastic nature of housing supply and demand less able to adapt to the immediacy of re-designating long-term housing into short-term tourist accommodation.

While the relative absence of publicly available data from Airbnb makes it difficult to quantify the inflationary impact the platform has had on long-term residential rents in the Irish property market, international research indicates that the financial incentive to convert long-term lets into short-term rents has led to property being taken off the rental market and converted into tourist accommodation, even where this has required the eviction of tenants (Poston, 2016; Gurran and Phibbs, 2017; McCarthy, 2016; Cox, 2016). In cities with high residential demand like Dublin, tourists entering residential areas place further pressures on the housing sector, displacing permanent accommodation with temporary, and exacerbating accessibility to housing for those not in a position to pay higher rents. While the sharing economy is communal in nature, it only works if one is in a position to share, either by owning a house or being a landlord – for everyone else, it merely exacerbates costs.

Internationally compiled data from sources such as AirDNA and InsideAirbnb further reinforces this point. Lee (2016) found that in certain neighbourhoods in Los Angeles, 12.5% of all apartments were listed on Airbnb. In Tel Aviv, 800 people rent out 5000 apartments, or about two-thirds of all short-term rental in the city, as short stay accommodation on Airbnb, leading to housing shortages for the domestic population with reports emerging of long-term tenants being evicted to allow for short-term rentals.

The traditional BnB operates in a host-occupied home, and almost always in a house as opposed to an apartment. While Airbnb shares the BnB name, many of the listings on the platform are neither host occupied or houses, with 55% of rentals in Dublin taking the form of non-host occupied entire apartment rentals[i]. Further data from 2017[ii] indicated that 49.9% of Dublin Airbnb listings were available for over 90 days a year, indicating that the listings in question had effectively been permanently repurposed as tourist accommodation. This follows the pattern identified by Gurran and Phibbs (2017) which indicates that, where regulation does not restrict the repurposing of accommodation from long to short-stay, the higher economic returns emanating from Airbnb has led to residential accommodation being converted in short-stay housing, with the decrease in supply putting upward pressure on rents. While Airbnb initially marketed itself as a platform that allowed unused spaces such as a spare room to be provided to paying customers, now the entire apartment is likely to be vacated of residents and rented to short-stay tourists, initiating a culture of ‘flat-hotels’ without the regulatory requirements, planning permission or safety arrangements that true hotels are obliged to comply with. Furthermore, while hotels and hostels are tied to regulatory requirements and checks, the informal nature of Airbnb means hosts can have multiple listings without needing to meet guests, with 43.8%[iii] of Dublin hosts having more than one listing, with one host identified as having 35 different listings across Dublin city and Amsterdam.

The development of Airbnb from a sharing platform into an investment opportunity has also been reflected in the development of satellite companies, purposed to help property owners and investors use Airbnb to maximise profits. AirDNA is just one example of a business set up to monitor and analyse Airbnb statistics, allowing would-be owners and investors to ‘understand historical trends and new opportunities…[in order to] optimize your rental vacation property performance’. Dublin, owing to high touristic and domestic rental demand, gets the AirDNA seal of approval for investment. 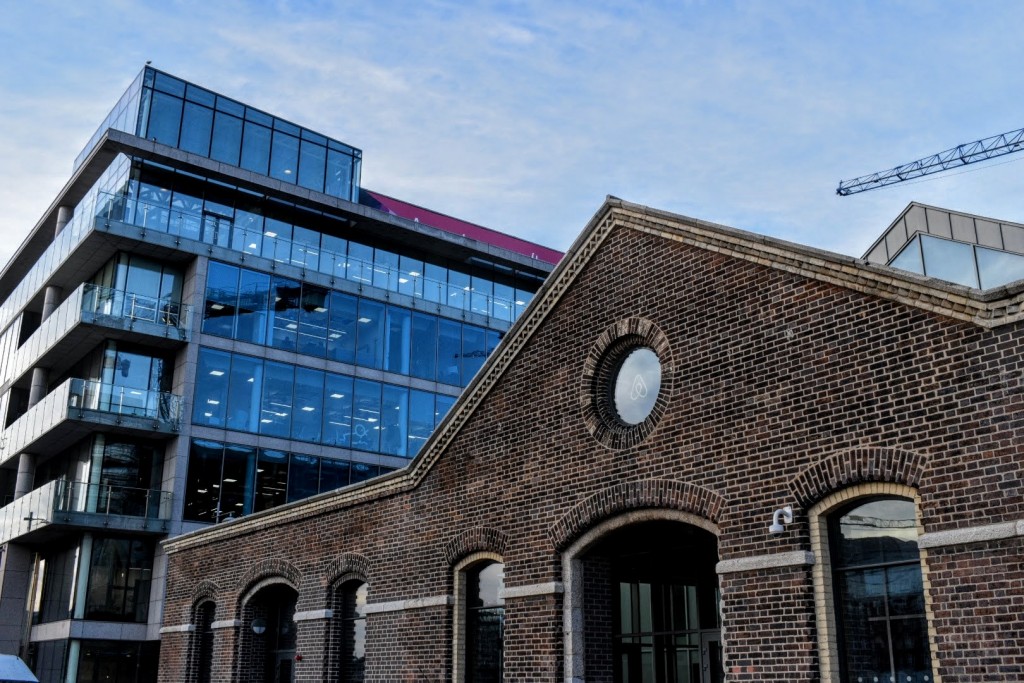 In 2016, Sociologist Matthew Desmond published Evicted, an ethnographic account of the ordeals of eight families in Milwaukee as they struggled to pay rent to landlords and lived under the constant threat of eviction. While the experiences and lack of legal protection afforded to tenants in Milwaukee may not be a mirror reflection of the experiences of Irish tenants and homeless seeking affordable places to live, it does raise the issue of whether housing has gone beyond being a shelter and a home, or whether the commodification of housing has made it foremost a commercial asset. Housing is no longer seen as a need, a right, a shelter or a home, but has rather increasingly come to be regarded as commodity, a property whose value or return indicates its worth. Prior to the financial crash of 2008, housing was largely valued in terms of its inflated purchasing price; in the aftermath of the crash, negative equity was the indication of worth. And when it comes to maximising the return on a property, renting to long-term tenants coupled with the landlord responsibilities and costs it entails makes limited financial sense when compared to the potential financial returns and freedom that repurposing accommodation as short-term tourist accommodation provides.

In a time where homelessness has reached record highs, available housing on the rental market is at an all-time low. While new housing cannot immediately be provided in areas of pressure, policy and regulation can be used to encourage housing supply to become more readily available for long-term tenants. Unfortunately, much of the policy recommendations from the Government opposition is for the introduction of popular but self-defeating rent caps, with the imposition of rental caps doing nothing to increase housing supply and merely encouraging landlords who are seeking to maximise returns on their property to repurpose it into tourist accommodation.

To facilitate the transition of housing currently purposed for short-term stays back into the long-term residential market, restrictions on the short-term market need to be defined and enforced. International precedents for this exist, with Barcelona and Berlin having already introduced restrictions in Europe, while Santa Monica in California introduced one of the most restrictive regulations in operation by requiring anyone putting a listing on Airbnb to live on the property during the guest’s stay, register for a business licence and collect 14% occupancy tax payable to the city.

This author would argue against the imposition of a tax on occupancy as this would effectively penalise single-listing hosts who are renting unused spaces. However, obliging hosts to dwell in the property during the duration of the guests’ stays would ensure that properties do not become ‘flat-hotels’, effectively restricting hosts to leasing out only one property to short-stay tourists. Further restrictions on how many Airbnb listings may be located within residential or high demand areas, restricting the days a room may be listed, and obliging Airbnb hosts to apply for a ‘change-of-use’ permit would also serve to disincentivise property owners repurposing long-term rents into Airbnb accommodation.

With Airbnb’s European headquarters based in Dublin’s Silicon Docks, regulating the operation of the platform in Irish cities may be regarded by some as risking the state’s relationship with the company, and undermining Airbnb’s decision to locate in Ireland. Yet restricting Airbnb should not be interpreted as an attack on the sharing economy or on tourists, whose presence forms an integral part of the Irish economy and should be welcomed. Moving to restrict short-stay housing should rather be encouraged as a necessary move towards responsible tourism, where the maximisation of profits does not come at the detriment of the local community. Internationally, tourism has led to conflicts with localities, with both Barcelona and Venice witnessing recent vocal backlashes against visitors. In a time where there is high strain on the national housing sector, ensuring that resident requirements are not undermined by visitor comforts will help ensure a positive and responsible relationship between visitor and locality develops into the future.

Cox, M. (2016) About Inside Airbnb. Retrieved from http://insideairbnb.com/about.html

McCarthy, N. (2016, July 7) Which cities have the most Airbnb listings? Forbes. Retrieved from http://www.forbes.com/sites/niallmccarthy/2016/07/07/which-cities-have-the-most-airbnb-listingsinfographic/#243fdb7369b5