It is certain that the slowdown in the Chinese economy will have far-reaching political repercussions. Across the world, countries reliant on the export of natural resources and commodities are about to enter a period of economic turbulence due to the decline in Chinese demand, with corresponding electoral fallout for those in power. The exemplar here is Brazil, whose economy slid into recession this year. A tanking economy, biting inflation (above 7 per cent)[1] and an expected period of fiscal austerity have combined with discontent at a corruption scandal to make Dilma Rousseff the most unpopular Brazilian president since polling began.[2]  This is a reasonably dramatic illustration of the travails about to be endured by most of South America, and by a broader group of countries reliant on commodity exports. I shall refer to this group as the “Brazil club”.

As Canada prepares to go the polls[3], it remains an open question whether it is in the Brazil club or not. Certainly its economy is in recession, and the slide in oil prices has a great deal to do with this. [4] It is clear also that after 9 years of rule by the Conservative Party, during the last four of which it has enjoyed a majority, the electorate is restless. The party is currently in a close three-way fight with the social democratic (although it has recently shifted towards the centre) New Democratic Party and the centrist Liberal Party, formerly Canada’s natural party of government and led by the son of the totemic Pierre Trudeau, Prime Minister for 15 years.[5] As of September 7th, an aggregate of polls puts the Conservative Party in third place, just behind the Liberals.[6] In 2011, the Conservatives won almost 40 per cent of the popular vote. They are currently polling below 30 per cent.

Do recession and an electorate keen to chuck its ruling party qualify Canada for membership of the Brazil club? Before attempting to answer that question, it is worthwhile considering the seemingly extraordinary provincial election result in Alberta, Canada’s most conservative province. Earlier this year Alberta saw the election of a New Democratic provincial government, ousting the ruling Progressive Conservatives. The province had not seen a change of government since 1971, and had never elected a left wing government.[7] Alberta also happens to be the home of Canada’s energy industry. Here we have the combination of an electoral avalanche and an economy hit by the collapse in oil prices. Surely this gives us license to confirm Canada’s entry into the Brazil club? It is more than likely that the events in Alberta do not give us such licence. Indeed, they ought to warn us of the dangers of simplifying Canada’s political outlook.

As noted above, Alberta had not seen a change of government in almost 45 years. Even in the provinces of western Canada (British Columbia, Alberta, Saskatchewan, Manitoba), where voters are not wary about multi-decade rule by a single party, this was an exceptional spell in power for any party in a western democracy, at any level above that of perhaps municipal governance. Given that the Progressive Conservatives had just absorbed almost all of their populist, socially conservative rivals, the Wildrose Party, and the Liberals had yet to elect a leader at the start of the election, the success of the New Democratic Party is less surprising than it looks at first glance.[8] When one considers the pronounced demographic changes[9] in Alberta since 2008, the last occasion on which the Progressive Conservatives won above 50 per cent of the popular vote, and the reasonably centrist political outlook of the New Democratic Party,[10] the result appears even less striking.  It seems less plausible that Canada is about to be gripped by any kind of lasting electoral revolution.  Voters in Alberta did not morph overnight from staid, placid conservatives into blood seeking sans-culottes. They ousted a party of 44 year incumbency and replaced it with the nearest, sensible and moderate alternative. 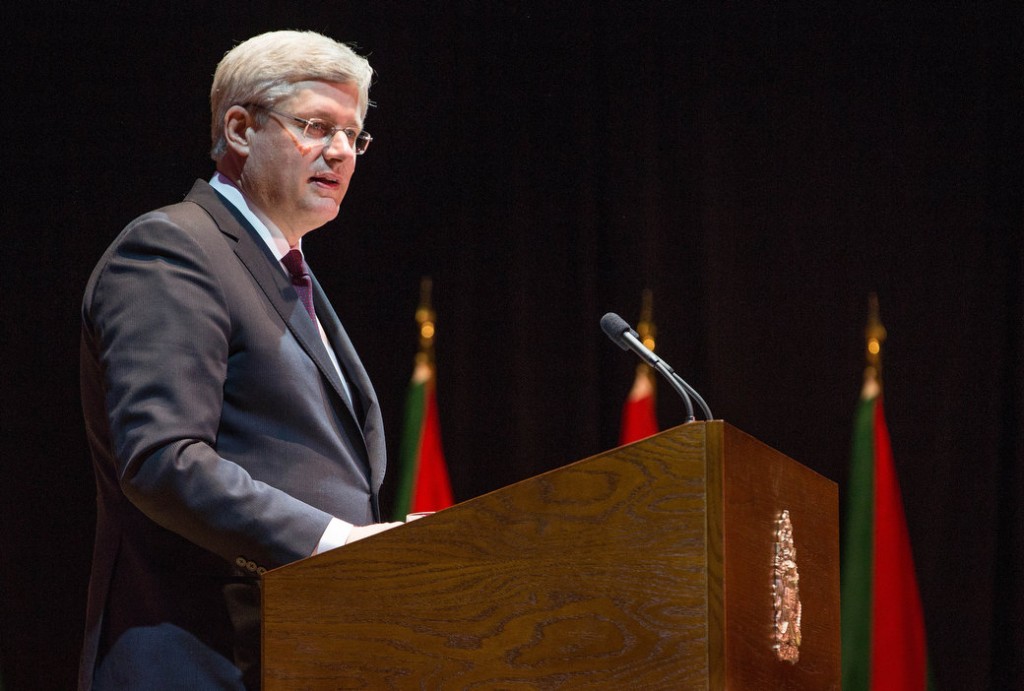 After nine years of Conservative rule, Harper is the second longest serving non-Liberal Prime Minister since John A. MacDonald. The results of the 19th of October elections could further extend his government’s existence. Photo Credit: Stephen Harper.

Alberta’s election result does not seem to augur doom for the Conservatives at federal level, then.[11] But Stephen Harper’s party still seems to be on the cusp of losing office. So why shouldn’t we group Canada into the Brazil club? To begin with, the historical record of centre-right parties in Canada indicates that the Conservatives are lucky to be considered competitive in the first place. Stephen Harper is already the longest serving non-Liberal Prime Minister since John A. MacDonald, the first Prime Minister of Canada. The last time a non-Liberal party held office for nine years, it was reduced from 167 seats to 2 seats.[12] And electoral volatility is still a feature of Canada’s (federal) electoral landscape. In the last election, the New Democrats, previously a third, fourth or fifth placed party reduced the Liberal Party to third place for the first time in the latter party’s history. Nine years incumbency and an unsteady economy would seem to spell more trouble for the Conservatives than they appear likely to face. Both factors might even be to the Conservatives’ favour, given their record for sound economic management, built up during the last global recession, when Canada outperformed most of the rest of the developed world. The Conservatives have a record of good government which might survive economic underperformance. In Brazil, Dilma Rousseff has no such record; voters were tolerant of graft and mismanagement while wages (particularly public sector wages) grew fatter. Stephen Harper is unpopular, but he is no Rousseff.

Even if they lose the election, and even if they were to come third, the Conservatives are not going to be swept out in any kind of landslide, barring late unexpected events. Neither the Liberals nor the New Democrats will come anywhere near a majority, and will most likely have to form either a minority government (a common feature of Canadian federal politics) or a coalition, which would be unprecedented. Canada’s rightwards drift under Stephen Harper will most likely come to halt after October 19th. Whichever party replaces him will not have sufficient strength to obliterate his legacy. At the time of writing, Canada does not look fit for the Brazil club.

[9] http://www.macleans.ca/politics/the-death-of-the-alberta-pc-dynasty/ The article cited states that Alberta’s population increased by 15 per cent between 2008 and 2014, with a substantial rise in the proportion of university educated inhabitants.

[11] It is worth noting that there is no direct translation between parties at federal and provincial level, even when they share (most of) the same name. Federal Progressive Conservatives have led provincial Liberal Parties, and so on.