The central question for established centre-left political parties in Western Europe is whether there remains a viable future for traditional social democracy, among whose features we might number support for the mixed economy and the institution of large cash transfers with the aim of redistributing wealth and easing poverty.

Recent developments within the aegis of the British Labour Party indicate that the party is alive to the futility of attempting to defend some elements of the post-war settlement. A recent think-tank report by the Institute for Public Policy Research, The Condition of Britain, augers a major shift in the rhetoric of social democrats. Most strikingly, in reference to the above, is the assertion that “[e]xcessive reliance on cash transfers to raise incomes has the effect of leaving people dependent on the spending preferences of the government of the day rather than experiencing the respect and dignity that comes from earning a living.”[i] 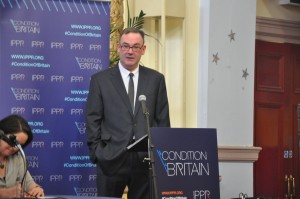 Jon Cruddas at the launch of The Condition of Britain. Photo Credit: IPPR UK

Reflecting also a recurrent theme of Labour’s policy co-ordinator, Jon Cruddas, the report advocated transferring power to municipal level in a number of areas of public service provision. It is clear that many in Labour, following the alleged centralising and statist tendencies of the Blair and Brown years, have accepted the argument made by Cruddas and others, that social democratic parties in government were charged with the task of decentralising power from state bureaucracies and from market monopolies to lower levels of administration, to voluntary and community groups, with the aim of constructing social capital in the face of the destructive tendencies of de-industrialization and the retreat of the state.

There are some central to this reorientation of British social democracy who repudiate almost the entirety of the postwar settlement. Maurice Glasman, the founder of the “Blue Labour” movement, is the most eminent representative of this tendency. It is his claim that the nationalization model and the centralising tendencies of post-1945 Labour governments aided in the eradication of the working class traditions of mutualism, whilst the maintenance of large cash transfers to the unemployed and other sections of society failed to inculcate the sense of social reciprocity required to sustain social capital.

Certainly there are now signs that the veracity of parts, at least, of this analysis is conceded by leadership figures in the Labour Party; Miliband’s recent announcement of his intention to alter payments to young benefits claimants mirrors the stress on reciprocity found in the Blue Labour account of the modern welfare state. The most intriguing part of this shift in social democratic thought, however, is the manner in which it marks the beginning of a rift between the traditional centre left and philosophical liberalism.

In this sense, what appears to be of narrow significance – namely, internal machinations in Britain’s Labour Party – are of much wider import than is initially apparent. That this is so is not merely on the basis of the position of intellectual leadership occupied by Labour (who have long since superseded the German SPD, the traditional engine of social democratic thought), it is because it denotes a possible point of convergence between social democrats, Christian democrats and traditional conservatives.

Labour’s new emphasis on reciprocity and the preservation of internal, local institutional goods sets itself at odds with the manner in which “Third Way” social democrats are alleged to have theorised the citizen. Theirs was an endorsement of the liberal view of the citizen as an atomistic agent, for whom human flourishing consisted in the possession of the requisite number of material goods not merely to avoid absolute poverty, but also to remain free of social obloquy. In caricatured form, this is just what opponents of the philosophical liberalism of such luminaries of John Rawls consider its fault; the just state is that which “allocate[s] the social product”[ii], without the concurrent promotion of virtue, nor an attempt to preserve institutional and local goods from the encroachment of external forces.

Without regard as to the accuracy of this representation of liberal theory, the renewed embrace of communitarian values, without the tincture of nostalgia for state-socialism, places social democrats on a point of convergence with both Christian democrats[1] and liberal conservatives. The rhetoric of localism chimes with the Christian democratic emphasis on “subsidiarity”, whilst the notion of building social capital through the promotion of voluntary and mutualistic traditions is concurrent with the emphasis in the Burkean conservative tradition on the “little platoons” of civil society, who are to be favoured over the utopian notion of state-directed social reorganisation.

The notion, too, of decentralisation of power from centralised elites to municipal, local and direct democratic level should perhaps prove a salient response to the jeers of insurgent populists across Europe that electorates have tired of national leaders who are aloof to the concerns of the non-metropolitan members of their public. There is, further, a sense that all of these prospective new themes of social democracy focus on group and individual agency in the face of the phenomena where national governments have been seen to be inept; the regeneration of de-industrialised areas, the ending of generational unemployment and the preservation of localised traditions in manufacturing, education and so on in the face of globalisation. Such an approach stands to contradict the populist rhetoric of local interests frustrated by impersonal forces such as mass immigration.

In all, it is becoming apparent to European social democrats that they cannot expect to enjoy a further renaissance merely on the basis that they have ceased to occupy power across most of Europe. One need only look at the derisory poll ratings for the PSOE in Spain, and the lacklustre electoral performance of the SPD after four years in opposition (and eight years since they last held the Chancellorship) to know that European electorates consider the present approach of the centre left in Europe to be exhausted. The approach being developed in the UK is perhaps the first sign that there exists a viable alternative to either a violent ideological oscillation to the left or resignation to a dwindling base of support, amidst an ever more restive and unstable voting public.

Social democracy enjoyed its greatest success in Europe when it learned to co-operate with the traditions of liberalism and political Catholicism. There is no reason to suppose that the support now enjoyed by parties of the far right and left will prove as solid as that once enjoyed by parties of the centre. In that basis, there is reason to tentatively predict a re-orientation towards the practice of the promotion of communitarian values on the part of parties of the centre left, in conjunction with the adoption of recurrent themes from Christian democratic thought and regional traditions on traditions such as “One-Nation” toryism.

[1] Glasman’s PhD thesis was in fact on the practice of Christian Democratic politics in Europe.