Ugly Carnival for the Beautiful Game

The World Cup has arrived. The colour, the pride, the expectation of great things from 22 men on a pitch: it is why we call it the beautiful game! Yet this World Cup, the most expensive in history, has been marred by controversy.

Brazil 2014 is not an isolated case. Sport events are no longer merely spectacles of human strength and fortitude, or even just a positive showcase of what the host nation has to offer; they have evolved into scenes of protests, anger and ethical dilemmas. Hot on the heels of a Sochi Winter Olympics tainted by allegations of corruption and failing infrastructure, the FIFA World Cup takes place in Brazil, the spiritual home of the beautiful game, the hosting of which has also been sullied by allegations of corruption and the diverting of funds from the actual needs of Brazilian society in order to stage a global spectacle.

Already, eight people have died in the preparations for the world cup in Brazil, the latest only last week when a construction worker was killed by a falling beam on Sao Paulo’s monorail…a project intended to facilitate fan travel at the world cup, but which now won’t be in operation until next year. The World Cup is a shambles…ill-prepared, ill-conceived and creating elite sporting infrastructures in cities like Rio de Janeiro where over one in four inhabitants still live in its squalid and overcrowded favelas. 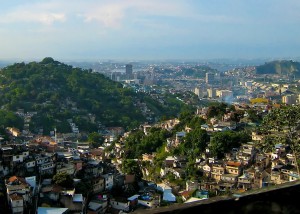 Dutch filmmaker Marijn Poels has documented some of the human costs associated with the World Cup, where favelas have been demolished before social housing has been provided, all in an attempt to help create a polished image for the influx of fans and media. Poels’ recent documentary, Pablo: From Guttersnipe to Advocate, reveals the true extent of measure being taken by special government force ‘Choque de Ordem‘ in Rio de Janeiro, whose task is to cleanse Brazil from the image of poverty, resulting in the apprehension, disappearance and even death of the street children of the city.

It may be fortunate for Brazil’s global image that Qatar, hosts for the 2022 edition of the competition, has stolen much of the negative attention through their blatant disregard for human rights. But with Qatar too, the media limelight seems wholly directed on corruption and bribery, while the estimated 1000 deaths in building the World Cup infrastructure…predicted to surpass 4000 by the time it actually kicks off in 2022, is almost entirely neglected by the press.

It is too easy to shift the blame onto Brazil for the drastic measures being taken against their own people. But as a developing country being placed in the world spotlight, it is hardly unexpected that corners (and ethics) will be cut in an attempt to smarten themselves up for the gaze of millions. FIFA claims to be a non-political organisation, but this should not absolve it from considerations when deciding who hosts the World Cup. The media as well are guilty of letting the sensational stories – budget overspends, bribery claims and corruption – completely eclipse their coverage of the human and social costs hosting the tournament has placed on Brazil. Journalism holds a responsibility to tell us not what we want to hear but what we need to hear, even at times we don’t want to hear it.

And of course, seeing as the World Cup is there for our entertainment, we the public also have a role. While things may not be altered before the World Cup comes to a close in July, the fact that the Olympic games will also be held in Brazil in two years time means that the issues which the World Cup raises should continue to be kept in the public discourse. Poels jokingly remarked that if we indeed watch the World Cup, we ought to do so only with a ‘very bad conscience’, but he also pointed that watching or not watching by itself does not change anything; it’s what is done afterwards that matters.

Will the World Cup be an enjoyable international spectacle? There is no doubt that the fans, the hosts, the colour and the bunting will make it one. But at the cost of lives, corruption and the diversion of funds from where they are needed in order to host a month long carnival of football…this show might prove a price too high for Brazil to pay.