It seems as if inter-ethnic, territorial and sectarian tensions have become a global epidemic in recent times. Israeli-Palestinian relations are on a knife-edge, the conflicts in Nigeria and Central African Republic have not been resolved, and there is a feeling that Ukraine is still very much an ongoing affair.

And then there is Northern Ireland. 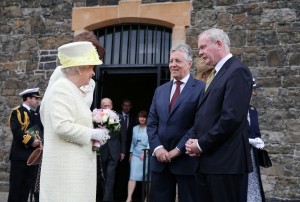 The visits of the Queen, described as a bold step, brought differing communities together in the realization that contrasting loyalties need not be an impediment for respect. Photo Credit: Northern Ireland Executive

While violence is not unusual there, the 12th of July always appears to herald a spike in sectarian activities and feelings. The longevity of the Northern Irish Troubles can possibly only be fully appreciated when compared in turn with the longevity of the Northern Irish peace process: a decades-long process of plotting a delicate road map to sustainable intra-communal relations, a map which as of yet remains to be finalised.  With the annual 12th of July celebrations just hours away, it is perhaps a suitable time to re-evaluate what direction needs to be taken in reaching a lasting compromise and consensus between the conflicting ideologies of the region.

In many ways, the hard work appears to have been done. The Good Friday Agreement can be regarded as having heralded a new age in the troubled region; no longer do the streets of Belfast resemble a war zone, and while some communities still remain divided along sectarian lines, the intra-communal violence is minuscule in comparison to that seen during the height of the Troubles. Yet the past couple of years has seen little progress towards the ‘achievement of reconciliation, tolerance, and mutual trust, and to the protection and vindication of the human rights of all’ which the Good Friday Agreement was intended to work towards; 2013 in the North was marked not by increased intra-communal harmony, but rather by the flag protests and wide scale Unionist rioting following the decision taken by the Parades Commission not to allow the Orange Order march past Ardoyne.

This year, the latest impasse has arisen as a result of the Parades Commission again refusing permission for the Orange Order to pass through the Ardoyne area of Belfast. This time it has resulted in the combined Unionist walkout on the Parades Commission, with the First Minister and DUP leader, Peter Robinson branding the Commission as ‘completely incompetent’.

For those in the Unionist community, agreeing to back down and accept the ruling of the Commission not to march past the largely nationalist Ardoyne, could risk being interpreted as a sign of weakness; a capitulation from those who declare loyalty to a ‘No Surrender’ maxim. The failure of the Richard Haass talks to reach agreement  at the all-party negotiations which took place in December last year proves that outside intervention is not always going to provide us with a resolution. However, outside mediation is perhaps the only hope we have of reaching lasting intra-communal constructive dialogue in Northern Ireland. It is naive to expect both the Nationalist/Republican and Unionist/Loyalist elements of Northern Irish society to, of their own accord, gather round a table and willingly agree concessions to please their opponents – and with the Unionists walking away from discussions with the Parades Commission, it is clear that the provisions for compromise within Northern Ireland are not by themselves sufficient  in reaching an understanding between the parties.

It is time for both the Dublin and London administrations to use all their influence to coax and perhaps even force the parties back to serious dialogue. In impasses like the present one, mediators and outside intervention is often required in order to reframe issues so as to identify possible concessions and trade offs, opportunities for agreement which

[d]ue to cognitive biases or internal political considerations, parties themselves might be unable to identify these opportunities for reaching common ground, or face serious criticism from within their own party for having suggested alternatives that deviate from established negotiating positions. (Konrad Huber, 2011, p.25)

What is required in Northern Ireland right now is a party or parties with an objective viewpoint, unclouded by political loyalties to one side or the other, who can safely steer both parties towards a resolution, and which both sides can use as an intermediary for compromise. While the British and Irish administrations may be regarded by some as not being fully impartial, history has shown that only with their proactive involvement in ironing out disputes have successful compromises been reached. Unfortunately, no such compromise to latest stalemate will have been reached before the 12th of July parades commence, but the necessity remains for outside intervention into the politics of Northern Ireland in order to redirect it back towards the visions outlined in the Good Friday agreement.