Ending Extreme Poverty: The Case for Relative vs. Absolute

In perhaps the most memorable anti-poverty speech of our time Nelson Mandela remarked “Overcoming poverty is not a task of charity; it is an act of justice. Like Slavery and Apartheid, poverty is not natural. It is man-made and it can be overcome and eradicated by the actions of human beings. Sometimes it falls on a generation to be great. YOU can be that great generation. Let your greatness blossom”. Ten years on from that powerful speech in Trafalgar Square, we are still hoping to be that generation. Ireland, due to its small size and population, is often perceived as a small international player in the world order. Ironically, this common misconception is made too often within Irish society, underestimating the global reach of this little island on the periphery of Europe to effect change on an international scale.

Development statistics and overseas development aid figures reveal that Ireland remains the global leader in the fight against extreme poverty and hunger, despite suffering its fair share of domestic hardships.

Although the marathon is far from over, the first and most prominent United Nations Millennium Development Goal has been achieved in halving rates of extreme poverty and hunger in developing regions from 1990 to 2010 (United Nations, 2015). Nevertheless, the fight against extreme poverty in developing regions remains ongoing in the wake of the worst global financial crash since the Great Depression. In the midst of capitalist collapse and the failure of financial institutions, anti-poverty charities and organisations such as Concern, Trócaire, UNICEF, and the ONE Campaign have been greeted with apathy at times due to the heightened suffering that has been inflicted upon vulnerable groups in developed societies.

In these testing times of post-crisis austerity the re-surging question one faces in the fight against extreme poverty appears to be ‘’what about the poverty at home?’’. The increased social and economic inequality in Irish society since 2008 has been tangible, especially among the most vulnerable groups such as lone parents, the elderly, the disabled and those previously categorised as living in relative poverty or below the adequate standard of living. The fiscal crisis prompted EU governments to pursue major austerity campaigns leading to measures such as increasing retirement ages, cutting public pension funds, slashing social benefits to lone parents and the disabled, and the overall trend of privatizing public services.

The effects of increased social inequality in Ireland manifested itself in increased suicide rates and a homelessness crisis. In 2014, an Oireachtas Health Committee on suicide prevention found that up to 560 suicides can be directly linked to the recession between 2008 and 2012. Director of the National Suicide Research Foundation, Ella Arensman, said that the recession was ‘’compounding the problems that the vulnerable were already facing’’ (Irish Examiner, 2014). 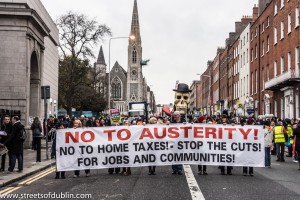 In addition to this, Ireland experienced a housing and homelessness crisis which is far from resolved at present. Focus Ireland reported that 40 families per month became homeless in 2014 while 2015 saw a 40% increase in homelessness since June (Focus Ireland Press Release, 2015). When Jonathan Currie, a homeless man in Dublin city, tragically died on Molesworth Street in December 2014 just metres away from Dáil Eireann, it symbolised the undeniable failure of the state in its austerity intensive path. Indeed, suffering was discernible and wide-ranging. In the midst of such a bleak post-crisis atmosphere, political attention centred on the mass disillusionment among the electorate with various austerity measures and budgetary cuts.

Of course, at certain points in time different political matters take precedence and public debate centred on issues at home rather than abroad. From revoked medical cards, to public sector strikes and social protection cuts, protests outside government buildings and government departments became part of the new austerity atmosphere. Yet, despite the lack of public debate and emphasis afforded to development goals abroad during this period, Ireland remained a world leader in overseas development aid.

Although levels of investment wavered following 2008, Ireland maintained its level of development aid well above the OECD average of 0.3% (OECD, 2014). Moreover, Ireland has been repeatedly commended for its focus on sub-Saharan African countries and affording 50% of its budget to the least developed countries.

Furthermore, despite domestic issues seemingly overshadowing development goals in public debate, the Eurobarameter (2013) survey carried out by the EU revealed that 68% of Irish people believe that developed countries should allocate more funding in the fight against extreme poverty. It seems that Ireland has avoided the common trade-off of prioritising relative poverty over extreme poverty or vice-versa, as evidenced by its continued commitment to development.

In 2014, policy advisor Simon Anholt created the Good Country Index, awarding Ireland the number one ranking. This means that on a comparative scale internationally Ireland was found to perform the best in terms of overseas development. The Good Country Index is unique in measuring the global impacts of policies and actions as opposed to analysing country performances in isolation, and more importantly analysing what countries contribute to ‘’global commons’’ or common goals (Anholt, 2014). So, what factors underpin Ireland’s success? An acute awareness of Ireland’s role as a global actor in our international community combined with powerful lobbying by grassroots organisations such as charities and anti-poverty groups can be attributed to Ireland’s success. 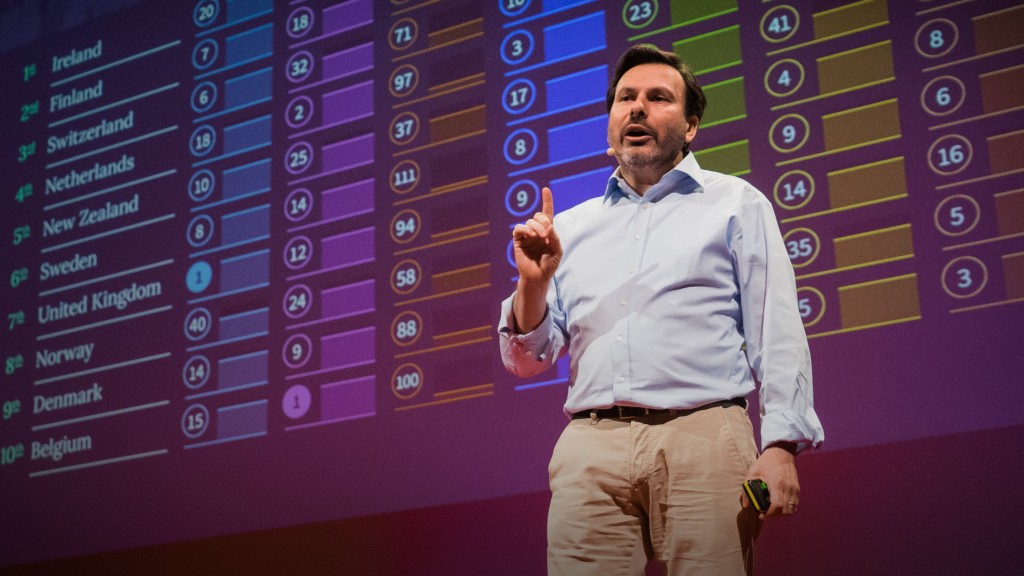 The case of Ireland signifies how globalization is key to understanding why extreme poverty abroad now impacts on domestic issues like never before. Incidents like the recent European migrant crisis have demonstrated that conflict, repressive regimes and extreme poverty in developing countries now impact on the economies, social services and public policies of developed states due to the ever-increasing interconnectedness of the international community. Sadly, there is no quick-fix for the European migrant crisis that has left thousands displaced. However, it remains clear that the root causes of pressing crises such as the migrant crisis caused by repressive regimes, conflict, violence, and extreme poverty need to be addressed comprehensively in their domestic states.

Failure to tackle these core societal problems will result in prolonged conflict, human rights abuses, extreme poverty and failed states in developing regions. Failed states that require military intervention, as was the case in Bosnia, Honduras, Lebanon and Somalia could pose a threat to European national security. Therefore, a continued commitment to overseas development aid will be instrumental in combating such crises. The achievements of Millennium Development Goals and ongoing progress of Sustainable Development Goals have demonstrated that ending extreme poverty is achievable, just as Nelson Mandela urged us to realise ten years ago.

Indeed, both relative and absolute poverty cause suffering on different societal levels; an unacceptable outcome or social reality for any state. It is now more important than ever before to realise our potential as a global actor with an international responsibility for development. For this reason, the case of Ireland reinforces with hopefulness the importance of a state’s international responsibility to end extreme poverty in our evermore globalized community, even whilst dealing with its our own domestic woes.