Geopolitical preferences and the Securitization debate 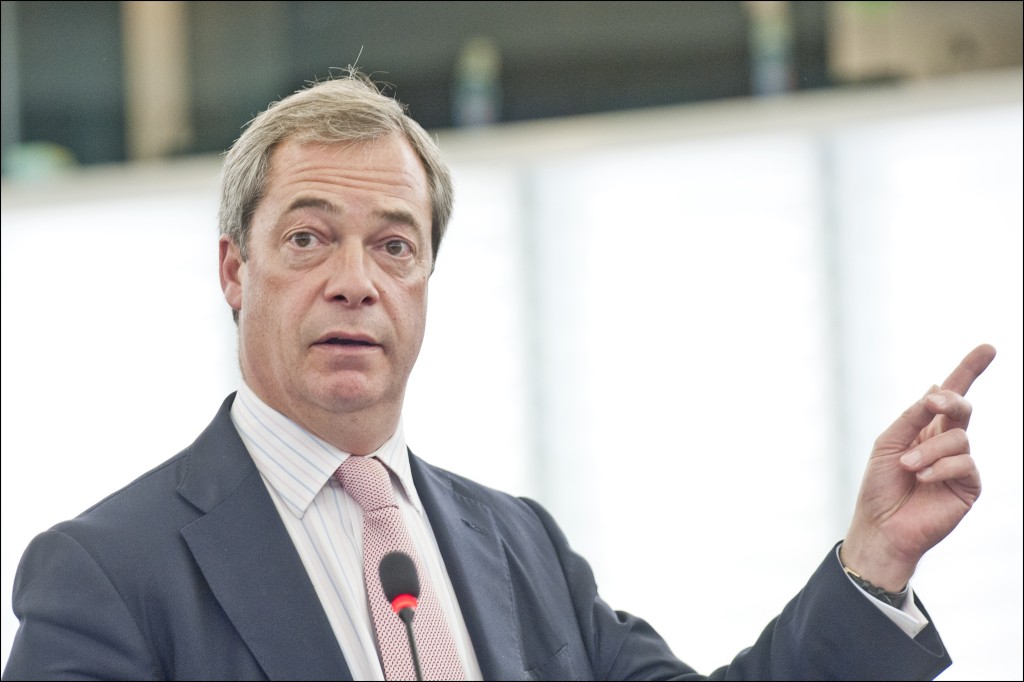 Nigel Farage remains one of the most vocal critics of  multicultural policy in Europe. Photo Credit: European Parliament.

The recent events in Paris have again brought the debate of securitization to the fore in European political dialogue. The acts, perpetrated by members of a minority ethnic community against a bastion of francité – the free press, has been decried not only in France, but across Europe as a continent and further afield. In its wake, not only have we seen acts of violence against ethnic minority communities, but also renewed calls for the rejection of multiculturalism and increased restriction on immigration.

The securitization debate involves the framing of immigrants as an ‘existential, material and/or physical safety threat’, with something defined as a security problem when declared by elites to be so (Lahav et al., 2014, p. 213). The Hague Programme agreed upon by the European Council in 2004 was intended to strengthen pan-European control of illegal immigration by ‘establishing a continuum of security measures’, with such measures ‘also of importance for the prevention and control of crime, in particular terrorism’ (The Hague Programme, 2005, in Mitsilegas, 2012, p. 17). The maintenance of this ‘Fortress Europe’ mentality has arisen not only as a result of unwanted immigration being perceived as a burden on the resources of the state, but also in response to both the increased securitization of immigration debates, and the perceived ‘desacrilization’ of national identity, manifested by the attachment immigrants and foreigners hold for their countries of origin and the maintenance of ‘primordial ties’ to another community at the expense of identification with their country of residence (Kastoryano, 2010, p. 87). The state and affiliation to the state identity has been described by Karl Deutsch as a ‘cognitive trap in times of peace and a death trap in times of war’, but the concept of affiliation to the state and the state’s espoused national identity is still drawn upon in the political discourse on immigration (Drulák and Druláková, 2014, p. 334). With the possibility of resident migrants being naturalised, calls have also been made for procedures that would screen for the allegiance of immigrants, on the claim that ‘a citizen’s bond with his country has a quasi-sacred quality that goes beyond territorial links and cultural integration’ (Bigo, 2009, p. 584), while Ireland, in a move away from a civic conception of nationality and converging with the European norm of liberal nationality, is also considering the implementation of language tests for naturalisation (Honohan, 2010, p. 825). The expectation that immigrants will adopt or appropriate ‘historical references as a proof of belonging and of loyalty to a nation’s founding principles’ places an onus on immigrants from former colonies to identify with the ‘mother country’ (Kastoryano, 2010, p. 85). As such, while immigration as a whole is often generally opposed, migrants from former colonies, such as Latin American migrants to the Iberian peninsula, are regarded as preferable migrants owing to their fitting into the unifying category of ‘Hispano-Americans’ or ‘Ibero-Americans’, with emphasis placed on the colonial links between the home and the host nations (Suárez-Navaz, 2012, p. 43). Public discourse likewise makes reference to kinship and blood ties, alluding to the cultural, religious and linguistic similarities between Latin Americans and Iberians, contrasting them favourably to less desirable African migrants and affirming their status as ‘the most desirable immigrants of the twenty-first century’ (Izquierdo, 2003, in Suárez-Navaz, 2012, p. 43).

Geopolitical and colonial links play a major role in deciding the desirability of immigrants and, by extension, the severity of visa controls, with strict immigration control priorities taking a less important status (Finotelli and Sciortino, 2013, p. 85). In 2001, Council Regulation No. 539/2001 was approved by the European council, outlining a list of ‘third countries’ whose nationals required visas to enter the jurisdiction of the European Union, whilst also outlining a ‘positive list of countries whose nationals are exempted from a visa requirement’ (Ibid., p. 84). While the liberalisation of visa requirements has been substantial, the main changes have taken place in countries already listed in the positive ‘white’ list. In expectation of the Eastern Enlargement of the EU, visa restrictions were lifted for both Romania and Bulgaria in 2002, Serbia, Montenegro and the Macedonian Republic in 2009 and Albania and Bosnia the following year, while ‘visa dialogues’ with Russia, Ukraine and Moldova were also started in 2010 (Ibid., p. 85). Of interesting note is the fact that Albania had recorded high levels of rejected visa applications in previous years, with the country itself having been a major provider of irregular migrants to the EU, with over 10 per cent of all irregular migrants found in the EU having been holders of Albanian passports (Ibid., p. 86). This again would appear to demonstrate the importance of geopolitical considerations in trumping rigorous immigration control based practices when deciding to exempt visa requirements for Albanian citizens. As Finotelli and Sciortino’s summation would have it, ‘rather than a generalised goal of ‘zero irregular migration’ at all costs, EU visa policy seems to have pursued a long-term, tempered restrictionist policy, accepting a certain degree of irregular migration, possibly circular, from some, mostly European, countries in exchange for improved geopolitical relations and quicker and less problematic readmission of irregular migrants if and when caught’ (Ibid., p. 87).

Visa policies are more open to countries which are not only perceived as culturally close (such as colonially linked Latin America and the Iberian Peninsula), but also to countries which hold high levels of economic interdependence (Ibid., p. 92). While the securitization hypothesis would theoretically only allow the lifting of visa restrictions if the citizens of a country do not pose the threat of either illegal or unwanted immigration, the positive economic incentives of facilitated international travel implies less restrictions are placed on the citizens of major trade partners (Neumayer, 2006, p. 76). As such, while the political dialogue on securitization has increasingly targeted the Muslim migrant community and their loyalties (Bigo, 2009, p. 588), oil-rich countries of Western Asia and the Middle East (with the exception of Iraq and Iran) still have only a small percentage of visa requests refused (Finotelli and Sciortino, 2013, p. 92)[i]. Likewise, between 2008 and 2010, over 45 per cent of all short term visas granted were to citizens of the emerging economies of the BRIC countries (Brazil, Russia, India and China) (Ibid., p. 92). In contrast, although requests from poorer African countries amounted to only 13 per cent of short term visa requests, they accounted for over 40 per cent of visas not granted – a pattern also evident in the poor countries of Central and South Asia (Ibid., p. 92). Likewise, while the reciprocity of visa-free travel between EU members and other rich states is high, Council Regulation No. 539/2001 continues to maintain visa restrictions on many third countries who already grant EU state citizens visa-free entry (Neumayer, 2006, p. 78). The strategic importance of various countries is also considered when defining policies on forced returns, with geostrategic representations being taken into account when pressuring countries of origin or transit of irregular migrants, illustrated in the quote of an official at the French Ministry of the Interior: ‘we will not bug Tunisia, India or Russia the same way we bug Bangladesh’ (El Qadim, 2014, p. 251). Of interesting note are the apparent patterns of domination and subordination between countries, examined from a postcolonial perspective by El Qadim in the case of Morocco and France, but also evident between other nominally equal sovereign states (Miller, 2000, p. 30). Key questions arising from this will be on the extent by which patterns of domination and subordination in the immigration system will dictate international migration in the future, and to what degree this will impact the cooperative management of international migration (Ibid., p. 30).

Visa issuing in Western Europe illustrates elements of political favouritism, both with regards geopolitical preferences and postcolonial links, as well as with relation to the economic interests the visa-issuing country has in emerging economies, with postcolonial critiques of international relations stressing the tendency to treat actors from the South as objects rather than subjects of policy of the North (El Qadim, 2014, p. 242). In Eastern European Union member states, visa-issuing is acted upon nearly exclusively with relation to non-EU Eastern European states, illustrating further how visa policy is not solely linked to economic or security considerations, but also firmly dictated by geographic selectivity (Finotelli and Sciortino, 2013, p. 96). While the discourse on securitization of immigration may argue for the tightening of political boundaries, and the economic side of the liberal paradox requires freedom of movement, in many ways ‘Fortress Europe’ fulfils neither side of the paradox through its asymmetric immigration policies: engaging in an open door policy in certain geopolitical directions, while maintaining heavily guarded and restricted gates in other directions (Ibid., p. 97).

Migration analysts have spoken of a ‘Fortress Europe’ premised on an electronic walls policy, on the tendency of political discourse on migration to cling to a white nationalist identity tending towards racism, and on the ‘war on immigrants who are viewed as a negligible human surplus that can be thrown out if the needs of the economy so require’ (Bigo, 2009, p. 589). In this sense, the liberal paradox, as defined by Hollifield (2004), certainly holds credence. Economic success relies not merely on the free trade of goods and unrestricted movement of capital, but also on the unhindered workings of the economic markets, explaining why European political elites continue to advocate greater economic immigration to the EU (Lahav et al., 2014, p. 219). In contrast, the rhetoric of securitization of immigration and the need to protect the identity of the liberal state from a purported onslaught of migration and ‘otherness’, has led to increased calls to strengthen Fortress Europe and increase restrictions on further unwanted migration, with these security concerns helping to initiate a ‘watered-down McCarthyist logic’ of Fortress Europe being under siege (Bigo, 2009, p. 583).

While the liberal paradox speaks of the conflicting desires of ‘open’ economies but ‘closed’ political communities, this article has sought to argue that political communities are not necessarily closed in nature, but rather selectively open to certain migrants, while off limits to others. While the political rhetoric and public discourse may often assert to oppose immigration completely, policy approaches both at national and supra-national levels are more inclined to tolerate migration, provided it serves wider political interests. In an increasingly globalised world, where freedom of movement has become a powerful political bargaining chip, it ought not to come as a surprise that citizens of countries which have the most to offer the EU economically (BRIC and oil rich countries), are also far less likely to face visa restrictions to entry to the EU than are the citizens of countries with less appealing economic characteristics. While political interests may indeed call for ‘closed’ political communities, the reality appears to show that the level of closure remains negotiable according to what states can bring to the table.

[i] This assertion could be questioned in light of the ethnic profile of previous home grown terrorists in the United Kingdom and France. For instance, the 7/7 bombers were largely of Pakistani descent, while in France the majority of terrorism issues have arisen with regards French residents of North African descent.

Drulák, P., and R. Druláková (2014) ‘The richness of the liberal tradition in international relations: Karl Deutsch on political community and the European integration’. International Relations, 28(3), pp. 333-349.

Finotelli, C., and G. Sciortino (2013) ‘Through the Gates of the Fortress: European Visa Policies and the Limits of Immigration Control’. Perspectives on European Politics and Society, 14(1), pp. 80-101.

Neumayer, E. (2006) ‘Unequal Access to Foreign Spaces: How States Use Visa Restrictions to Regulate Mobility in a Globalized World’. Transactions of the Institute of British Geographers, 31(1), pp. 72-84.

Suárez-Navaz, L. (2012) ‘Kichwa Migrations Across the Atlantic Border regime: Transterritorial Practices of Identity and Rights within a Postcolonial Frame’. The Journal of Latin American and Caribbean Anthropology, 17(1), pp. 41-64.