Syrian crisis: Pragmatism in the face of suffering

There is a clear sense that the current crisis is a knee-jerk, short-sighted response to the crisis, a reaction to public pressures arising from the inflow of migrants into Europe as opposed to the actual cause of the displacement. Widespread public sympathy for the plight of migrants exists; itself in part generated by emotionally charged imagery from the media.

Yet, the combination of high principles and low politics will not provide a lasting solution to the dilemma. One needs to remain aware that while many will seek to ease the ordeal of Syrian migrants by welcoming them into their country, others will not be so forthcoming in their acceptance. In August last year, I wrote that Islamaphobia is likely a perpetrating factor in the rise of radical Islam in countries such as France, Belgium and the UK; a theory I still maintain. The accommodation of individuals in Ireland, many of whom are arriving from a brutal and highly sectarian war zone, into a European country with a different language, culture and inhumane direct provision system, is unlikely to successfully integrate those individuals into Irish society, but rather foster the development of ethnic ‘parallel societies’ in Ireland as are already seen in Belgium and France (Alba, 2005). While in sociology the likes of Robert E. Park and the wider Chicago school of thought may have regarded that time will eventually enable the assimilation of such minorities into the wider ‘melting pot’ of society, the case in various European states such as Belgium and France have shown these ethnic divisions do not disappear but rather manifest themselves in increasingly ethnically distinct communities prone to ‘white flight’ from indigenous inhabitants who seek to distance themselves both socially and spatially from such parallelgesellschaften and the negative connotations they hold in the host society (Hiscott, 2005).

The complexity of the situation seems to be lost by the media, whose portrayal of the current crisis appears to paint the migrants in one broad brushstroke; individuals fleeing the ravages of ISIL or the barrel-bombing campaign of Assad’s forces. Indeed ISIL are largely responsible for the emergence of crowded refugee camps in regions such as Northern Iraq, but this should not disguise the fact that the Shia dominated Iraqi army, fighting against ISIL, is contributing to the displacement of Sunnis, some of whom are not opposed to and even publicly state their support for the ISIL. The relocation of individuals of such persuasion into Europe is not an incomprehensible situation, and will only increase the potential for clashing as opposed to harmony with the domestic population and values of the European states they are resettled in.

At present, the current arrangement benefits the smugglers most, who continue to smuggle and engage in their own largely sectarian based discrimination, with reports of discriminatory treatment towards women and religious minorities being reported by some of the migrants. Yet the closure of the Lebanese and Jordanian borders to migrants owing to the saturation of both countries with refugees, coupled with the refusal of the Gulf States to take in migrants, has forced the steps of more migrants towards European states.

Such short-sighted responses from European member states are not, in turn, solutions to what is a protracted and complicated conflict. The long-term solution should not be the relocation of individuals or families, but rather the attempted resolution of the conflict in Syria.

The debate has been framed in the context of how many individuals European states can take in. Yet those who are caught in Syria should not be forgotten solely because they haven’t caused an immediate problem for European states. The actual magnitude of the humanitarian crisis means that such approaches are far removed from the actual need for the solution to be focused on the ground in Syria and neighbouring countries, who up to now have been left to try to accommodate the displaced with only limited external support. While the conflict in Syria and northern Iraq has had plenty of external involvement, military and financially, it has been largely directed towards supporting different military actors in the region and not towards the protection of individuals on the ground. The West and the Gulf states continue to support the increasingly fragmented and sectarian rebel forces, Russia and Iran provide assistance to Assad’s regime forces, Germany and Sweden are providing military equipment to the Kurdish Peshmerga forces while Turkey, itself assisting the anti-Assad rebels and now engaging in the Western coalition actions against ISIL, is fighting against the Kurdish forces in its own side-conflict. All the while ISIL, perhaps the most international of all forces in the conflict, continues to fight against the rebel forces, the Assad regime, the Iraqi army and the Kurdish rebels.

While conflicts in Arab states have been prevalent in recent times, the longevity of the current conflict has certainly been prolonged with the help of international interference. Indeed, it is highly unlikely that the rebel forces, even allowing for those who have defected from the Syrian army, would have been able to hold-off the Syrian army without assistance from the Gulf and the West. Yet regardless of the issues which triggered the conflict, it has descended into one driven by sectarian rather than humanitarian values, and the moral obligation of the European and Western states has to be to stop the war as opposed to taking sides and occasionally picking up the pieces that fall their way. The solution should not only be to increase support for Syrian border states who still host the vast majority of refugees, but to also create and maintain safe zones within Syria and Northern Iraq. Such safe-zones have already been created with the aid the Peshmerga in Northern Iraq, and similar efforts with the assistance of other actors have to be pursued in areas of Syria. While such measures by themselves will not bring an end to the conflict, and the need to cajole the different parties in the conflict to the negotiation table remains, it would lead to the more manageable, less permanent and less widespread displacement of Syrians within their own country as opposed to the relocation of the 50% of Syrian citizens who are displaced into states across the globe. 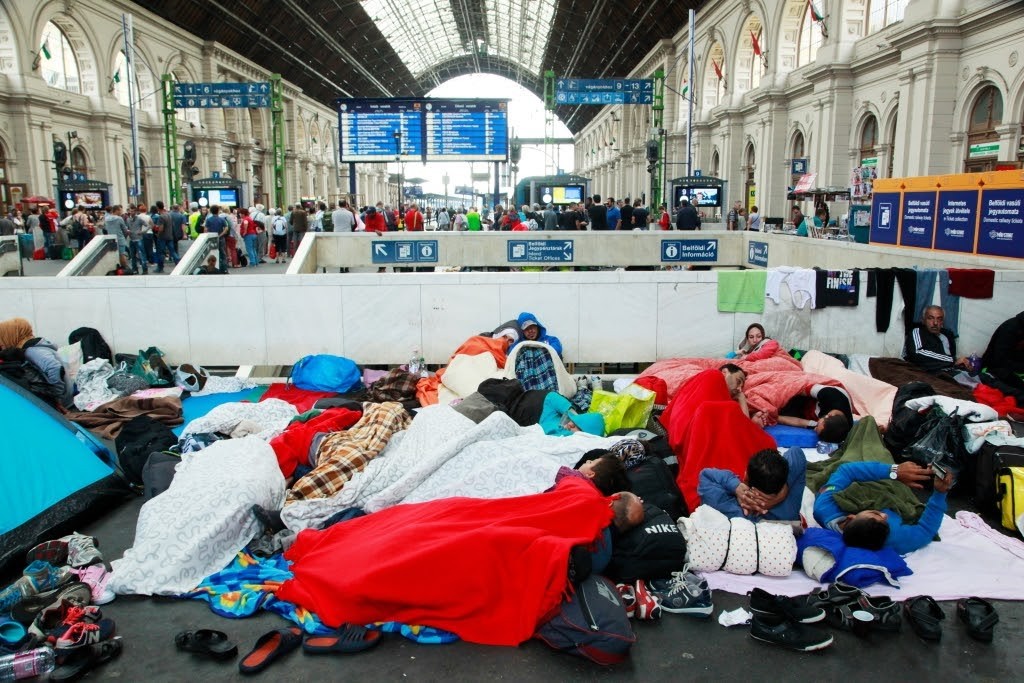 The European refugee crisis, as it has been widely dubbed by the media, is not referring to the conflict in the Levant which has wrecked the region over the last four years, but rather to the calamitous and disunited European response to the influx of individuals into European territories. While the adequate response to this crisis can be achieved by fairly redistributing individuals across member states, this will not resolve the root of the crisis into the future, where half of the population is displaced and the UN is predicting that as many as one million more Syrians will flee the country by the year’s end. Neither is relocation necessarily aiding those most in need, but rather those most determined to make a new existence for themselves in Europe. The migrants entering Europe are less likely to be those under the most pressure, but rather those who are fit enough to travel, who have the financial resources to enable them to make the journey, and/or those who have relatives or other ethnic links to assist them on their arrival.

Bluntly stated, those entering Europe in the present times are not refugees in the strictest sense of the word, but migrants seeking a stable life, marching through and in many instances being actively hurried along by peripheral European states and Turkey in the search of a more prosperous existence in Europe. There is nothing wrong with seeking a better life, and as citizens of developed countries we hold a special responsibility to help improve the lives of those with fewer opportunities. Yet, by relocating these migrants, the EU is making temporary displacement a permanent phenomenon. While individuals are unlikely to consider camps as a permanent home, those who are resettled in prosperous European states are far less likely, even if their own existence in those states are not ‘prosperous’ by Western standards, to decide to relocate to a war-ravaged Syria to rebuild their country.

Yet this is precisely what Syria will require in a post-conflict future. If post-war Syria is to be occupied only by those who did not have the necessary resources or social links to migrate into the EU, the country will remain hamstrung into the future, and indeed is more likely to find itself less able to combat the rise of extremisms and ethnic-religious factions.

The relocation of individuals is a tried and failed policy, with Somalia being a case in point. In response to conflict in the state since the early 1990s, the Somali diaspora has and continues to swell in states across the globe, including 80,000 in Toronto and 60,000 in London (Hopkins, 2010, p. 520), while Somalia, bereft of its most successful people while the conflict continues, is now ranked as the second most failed state in the world. Syria, currently in ninth place on the Fragile States Index, is likely to continue to climb this list if a proactive response to end the conflict from international actors is not forthcoming.

The Economist – Refugees: The Exodus

The Spectator – If you really want to help the refugees, look beyond the Mediterranean